What are the symbols we invoke to inspire us?

Francis Xavier was a close partner of St Ignatius of Loyola, who is founder of the Jesuit order of priests. Francis was a missionary who travelled extensively into Asia from Spain (no mean feat in the 1500s!). He was influential in spreading the word of God, especially in India. There remain many Catholic schools in India today. Many St Francis Xavier families have, in fact, attended these. Care for others and the spread of Christian beliefs and values were near to the heart of Francis. 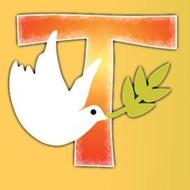 Ignatius adopted the monogram IHS as the emblem of the Jesuit Order. This is the symbol on our church side doors pictured. It was chosen by the designers of our church to honour the Jesuit tradition of Francis Xavier. IHS, dating from the 8th century, is an abbreviation for “IHESUS,” the way Christ’s Name was spelled in the Middle Ages. Therefore it is a representation of the name of Jesus. The teachings of Jesus are central to the catholic school. For further information on Francis Xavier please click on the link Francis Xavier

The Fransican tradition is one which follows the way of St Francis of Assisi.  Francis chose an ancient symbol of redemption as his crest: the Tau Cross.

In commenting on the scripture, the early Chrsitian writers used its Greek translation, in which the last letter of the Hebrew alphabet, the tau, was transcribed as a “T”.  Francis had first encournteres this symbol when he was caring for lepers.

He used Christ’s cross – shaped like a Greek “T” as a protection against the plague.  Francis eventually accepted and adapted the “T” as his own crest and signature.  For him th “T”  represented life-long fidelity to the Passion of Christ.